The relationship between Europe and Latin America begun far back as the 1500s where Latin America, especially Spain was colonized by Europe. In that time the European nations took advantage of the colonization and used mercantilism to amass wealth from the Latin American nation.

Europe’s colonization of Latin America had major effects on the Latin Americans in a variety of ways, which is why till today there seems to be a heated debate amongst individuals or groups when the names of these nations are mentioned side by side. The colonists were forced to speak the language of their colonizers; that is the European Language, thereby watering down their culture.

At the time there was a massive wipeout of the Latin America population as a result of the diseases brought in by the foreigners who came into the land. These and many more have had a ripple effect on the Latin American community in a lot of ways. When people are treated without respected or devalued it reflects on their ways of doing things even centuries later. This history is the reason why the mention of the two nations seems to cause a little bit of a stir amongst people. 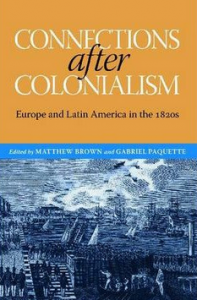 Following all that transpired between the two nations, this book’s title may sound incredible to many people who know the full story, but this book edited by Matthew Brown and Gabriel Paquette is a compilation of analytical research by prominent scholars and historians who fully have given an in-depth explanation and proof that the 1820s were a period of time when the two nations had a cordial cultural, economic and social relationships. This, of course, is contrary to popular arguments and assumptions of people who share an opposite perspective.

The contributing analysts include Brain Hamnett who covers the topic “Themes and Tensions in a contradictory decade: Ibero-America as a multiplicity of states explains in depth the significant progress Latin America makes in that period of time. In the chapter Include and Rule: The limits of the liberal colonial policy, 1810-1837, historian, Josep M Fradera seeks to understand and break down the efforts made by Spanish liberals to revive the Latin American nation.

Maurizio Isabella while examining the topic Entangled patriotism Italian liberals and Spanish America in the 1820s, she goes to describe the cultural development of the Latin American nation through literary and visual representations. In Will Flower’s analysis, Rafael del Riego and the Spanish origins of the Nineteenth century Mexican Pronunciamento Fowler talks about James Dunkerley’s perspective of America’s in the 1850s and James’ opinion of Ireland being an American country located in the wrong continent.

Other topics by contributing historians include:

Heretics, Cadavers and Capitalists: European foreigners in Venezuela during the 1820s, Reuben Zahler

There’s no doubt that we are under threat from the Negroes of Santo Domingo: the spectre of Haiti in the Spanish Caribbean in the 1820s; Carrie Gibson

The 1820s in perspective: The Bolivarian decade: Matthew Brown

The book is an eye-opener and calls for a major paradigm shift. To learn more about Latin America and Europe, click on the link below

Scroll back to top